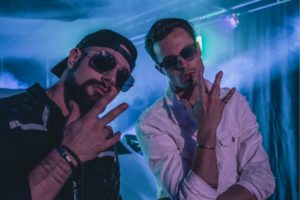 Brooker and Bozar are 2 young artists from Vienna who have been collecting six-figure clicks in no time with their Autotune anthems since May 2019.
Within 9 months, the two newcomers have already released 10 singles and, with their catchy harmonies, have already inspired tens of thousands of people with their music.
With a mixture of pop and rap, the two provide ear catch and entertainment factor in their tracks.

With their single “BB for President”, the two also criticized the political situation in Austria due to the beginning of the last National Council elections and caused a real uproar.

WHO ARE BROOKER & BOZAR ?

The musical streak of the two artists formed as a child.

Brooker (Ben) started playing guitar when he started elementary school and gave several guitar concerts to hundreds of people as a child. He founded a band with his current producer (Lukas) Basic Bitch at a young age, but it quickly disbanded.

Bozar (Fabian) was also drawn to the guitar at the age of 6 and learned the instrument. Within the next youth years he founded a band and was among other things in the Dominican choir. There he discovered his love for chanting and started writing his first rap lyrics early.

(Ben and Fabian) Brooker and Bozar met about 5 years ago in the Hietzinger area (1140 Vienna). What was known at that time over two corners should change drastically in the next few years.

Even as children, the two independently followed the hip-hop scene and fell in love with it. Through various parties, they became even closer friends and met soon every day, since the two lived in the same district (1140).

When they moved into a shared apartment, everything changed within a few years. They decided to record their own songs and to mix up the Austrian / German scene.

Their producer Basic Bitch (Lukas) and Ben (Brooker) have been friends since childhood, which is why a cooperation quickly came about and Brooker & Bozar recorded their first track “Para Brudi“. Since they received a good response and the decision was made to make music, they released 9 more songs within 9 months. 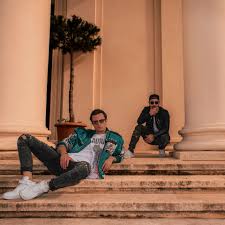 How can you describe our music style?

Basically, we hear hip hop in almost every language. Croatian, German, Mexican, Spanish, Italian, American or French. Therefore we would think that our music has an international influence. We also like to try out completely new things that have never existed before, such as Tech House + Rap.

We also like variety. Different beat variants. Once French, once American, and also tech house beat styles. It makes us more fun to work with.

What differentiates our music from what is currently available in German rap?

Basically we want to arouse positive feelings in people with our music. An unrestricted life in full freedom, wild parties and travel are our main topics.

We are not interested in writing about cocaine trafficking, gun ownership, or other ghetto issues because we are not that. We don’t do azzlack or street rap, but rather the opposite.
We write about Highlife + Good Vibes and record our most eventful moments and experiences on one beat.

We also do everything ourselves. We are independent artists and are not signed on any label. We try to release 1-2 new songs every month and put a lot of time and energy into our music in addition to our normal work.

What is your goal with your music?
Phew, good question. Basically, it is enough for us to realize ourselves and just be able to make our own music. It fills us with joy and gives us great pleasure in taking up our life and other topics and putting them on a beat. We experiment with word jokes, comparisons and word games every day until we think we have something in the box and then we go to the studio.

We do not decide what will happen to our music in the future, but the listeners outside. Of course it would be nice to be able to devote 100% of our everyday life to music, and to increase our output even more, but we love what we do, have a lot to do musically and do not put any pressure on us to achieve any specific goal in a certain time.

For example, next month we would like to release our 1st EP with several songs aimed at a chilled vibe.
An American-inspired EP with a special theme is also planned and we have also planned a few more singles.

What is your latest release?

Our latest release is called “Yin Yang”. In this song we chose a topic on a tech house beat that should describe our musical symbiosis. Bozar, for example, has very different musical strengths than Brooker, and vice versa. Bozar also likes to wear black outfits and Brooker prefers the color white. Basically, we wanted to create something completely new with this track that we have never seen before in the hip-hop scene. Tech-House + Rap / Pop and a few weeks of hard work have led to a result that we are quite happy with.